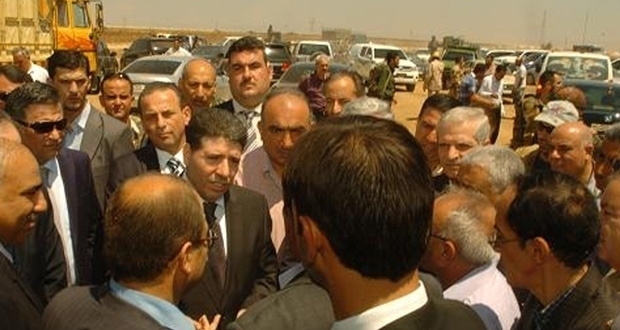 During the visit, the prime minister announced that a sum of SYP 1.365 billion has been allocated to the budget of Hassakeh province to fund services and administrative projects.

The visit covered a number of exam centers where baccalaureate (12th grade) exams were being held in the city of Qamishli, in addition to Qamishli National Hospital, a textiles factory, and a power plant that had been targeted by terrorists‫.

Halki visited a number of Syrian Arab Army units on the frontlines confronting terrorists, where he saluted the bravery and steadfastness of the army personnel‫.

The prime minister was accompanied by Deputy Prime Minister for Services Affairs Omar Ghalwanji, in addition to the ministers of education, higher education, health, and internal trade and consumer protection‫.

During his visit to the province, Halaqi met local dignitaries and social, spiritual, economic, and cultural figures, representatives of popular organizations and unions, People’s Assembly members, and heads of state establishments‫.

Speaking at the meeting, Halki stressed the government’s commitment to improving communication and partnership with all of Syria, lauding the steadfastness of the people of Hassakeh and their support for the Syrian Arab Army‫.

Ministers attending the meeting responded by claiming that steps have already been taken to ensure the availability of bread, prevent rises in market prices, and secure the province’s needs of medicine and medical equipment‫.