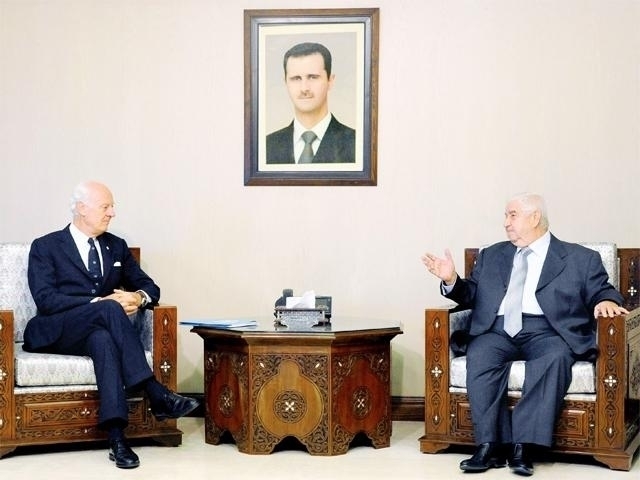 The envoy began consultations on Syria in early May, to which a delegation from the Syrian government was invited along with 40 Syrian sides and 20 international sides‫.

De Mistura held separate talks with different sides at the United Nations headquarters in Geneva away from media coverage. The preliminary stage of the consultations was expected to last for five to six weeks‫.

"De Mistura presented his review to Muallem during a meeting in Damascus on Monday", Syrian news agency SANA reported‫.

Muallem briefed the UN envoy and the accompanying delegation on developments in Syria, expressing support for de Mistura’s efforts towards a political solution to the Syrian crisis‫.

According to SANA, there was stress during the meeting on the importance of what came out of the Moscow Syrian-Syrian talks, held in January and April, and the need to follow up on them so as to make possible a Geneva III meeting, after two rounds of talks held in the Swiss city failed to bring about results.

In a press conference held in Geneva on May 5, de Mistura stressed that the Geneva meetings don’t constitute a conference or a Geneva III, as they have no beginning, middle, or end, and are not expected to produce any major final announcements‫.

De Mistura added the meetings involve close talks with all relevant sides to discuss the crisis in Syria, see what may lie ahead, and look for ideas regarding the future of the country, all of which should lay the groundwork for a solution‫.