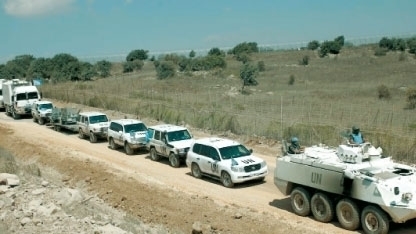 The United Nations has reconfirmed 'deep' cooperation between "armed groups" and Israel in the areas controlled by United Nations Disengagement Observer Force (UNDOF) in the Syrian Golan Heights.

The latest report presented by UN Secretary-General Ban Ki-moon to the UN Security Council on the UNDOF activities in the period between March 3 – May 28 explained that Syrian Arab Army operations in the liberated areas of the Golan Heights were in response to attacks by armed groups.

The report revealed an alliance between the Free Syrian Army and the Nusra Front, also stating that over the course of the past month, UNDOF discovered insurgents were travelling in armored vehicles similar to those used by UNDOF forces.

The report also mentioned the transfer of wounded militants to the occupied Golan Heights to receive treatment in Israeli hospitals.

The UN report revealed the Syrian government had announced in December and April that seven Damascus-based UNDOF personnel were no longer welcome in Syria.

The report recommended that the Security Council should extend the mandate of UNDOF for six more months, ending on December 31, 2015, pointing out that Damascus has given its approval for the proposed extension.