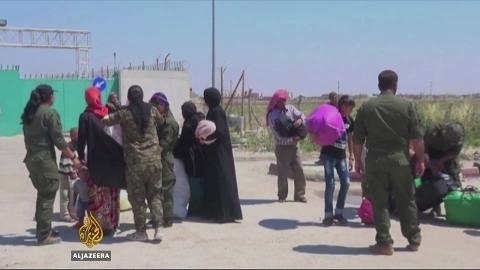 Kurdish fighters and their allies have captured a military base controlled by ISIS considered the first defense line north of ISIS' de facto capital of Raqqa in northern Syria.

The UK-based Syrian Observatory for Human Rights and Kurdish activist Mustafa Bali said that Kurdish fighters from the People's Protection Units (YPG) had captured the base known as Brigade 93 near the town of Ain Issa on Monday night.

Charlie Winter, of the Quilliam Foundation, told Al Jazeera that the base was important because it linked Raqqa to other ISIS outposts to the east and west.

Monday's development was the second major setback for ISIS in northern Syria in the past two weeks, after YPG fighters and allied rebel factions last week captured the nearby town of Tal Abyad on the Turkish border.

Since Tal Abyad was liberated last week, a steady stream of people have been returning, and sources have told Al Jazeera that ample quantities of bread and other food supplies are already available in the town.

Andrew Tabler, an expert on Syria at the Washington Institute for Near East policy, described the capturing of Tal Abyad as "a significant blow for ISIS" because it cuts off one of its main transit routes used to smuggle supplies, weapons, and fighters.

"For the Kurds, it's significant because it means they can consolidate their territory by connecting Kurdish enclaves in Kobane to the west and Hassakah to the east," Tabler said last week.

Kurdish fighters and Syrian rebels began their main advance on the town on June 11, backed by air strikes from the US-led coalition.

Syria's conflict entered its fifth year in May, with the government emboldened by shifting international attention and a growing humanitarian crisis exacerbated by the rise of ISIS.

More than 220,000 people have been killed and half of the country's population of 22 million has been displaced in a war the UN refugee agency UNHCR has described as "the biggest humanitarian emergency of our era".