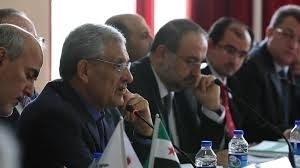 A senior source in the Syrian National Coalition confirmed that the Syrian Interim Government was criticized in the meeting of the General Commission of the Coalition currently being held near Istanbul.

In response to the criticism, interim prime minister Ahmad Tohmeh called for a meeting between the interim government, and the presidential and political commissions to discuss the future of the government, leaving all options open, either to withdraw confidence and form a new government, minimize the current government, or dissolve it entirely.

The criticism comes as the interim government faces its biggest financial crisis since its formation. Although the government tried to cut the expenditure and reduce it staff numbers, it has been unsuccessful in overcoming the crisis.