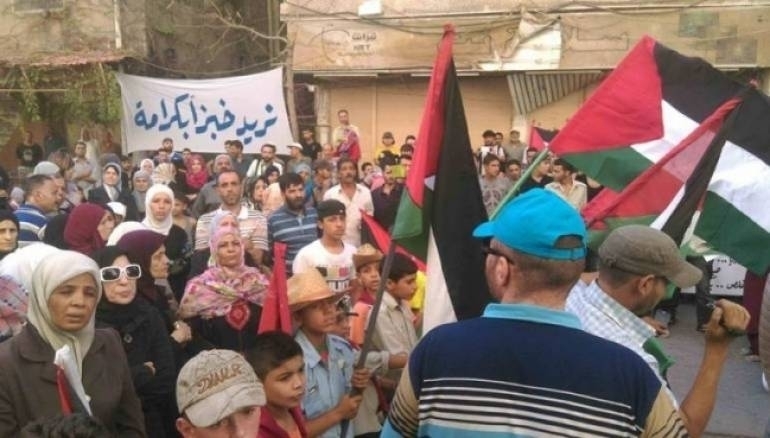 The demonstrations came after calls from a number of community organizations urged people to gather at UNRWA’s youth support center in Yarmouk Camp. Protesters expressed their rejection of the Palestinian Liberation Organization (PLO), raising banners describing their tragic living conditions while demanding aid and relief organizations to intervene to save the remaining Palestinians inside the camp.

‫ Angered by UNRWA’s decision to remove Yarmouk Camp from the list of besieged areas in need of aid, protesters expressed their fear of hunger and famine returning to the camp.

Protester Abo Alaa spoke to Zaman al-Wasl of his surprise upon hearing of the UN’s announcement: “We were shocked by the UN’s decision, we could not find any reason for that especially as the camp is still devastated with no support and the living conditions are increasingly worsening. The PLO does not give us anything, and other humanitarian organizations stopped providing aid to us, I don’t have any income to secure minimum needs of my family.”

‫ Another demonstrator, Wisam, believes the decision is a conspiracy against the people in Yarmouk Camp, comparing the destructiveness of the UN’s decision to the recent storming of the camp by ISIS and Nusra Front fighters.

‫ Although the UN officially issued the decision to remove Yarmouk Camp from the list of besieged areas only 10 days ago, UNRWA has not provided the camp with aid for almost two months, as people have relied solely on support from other humanitarian agencies.