Grand Mufti calls for adopting the language of democratic dialogue and not that of killing and destruction, urging people to choose their own representatives through politics and discourse 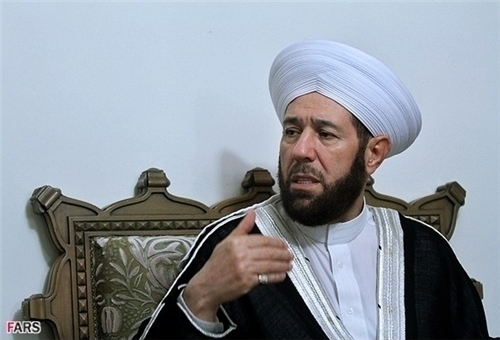 Syria’s Grand Mufti, Ahmed Badr-Eddin Hassoun, stressed that terrorism and destruction in the name of Islam only serves the agenda of the ‘Zionist Israeli entity’ in its effort to establish a globally recognized Jewish state.

“The Western states who claim to spread democracy are employing our Arab Muslim youths as a tool to undermine the Arab nation using sectarianism and regime change as pretexts,” Hassoun said in an interview with Algerian al-Nasr newspaper on the sidelines of his meeting with the Scholarly Councils in Algeria.

Hassoun called for adopting the language of democratic dialogue and not the language of killing and destruction, urging people to choose their own representatives through politics and discourse.

‫ The grand mufti told the newspaper that over the course of three years, he had addressed many letters to all religious leaderships in the Islamic world, as well as some Arab leaders, demanding a stop to the flow of weapons and arms into Syria in efforts to start reconciliation.

‫Hassan stressed that terrorists of more than 100 different nationalities are currently fighting inside Syria, and are used as a foreign tool to “tamper with the entire Arab world”. The religious scholar called upon his contemporaries in the region to start dialogue to establish states that are in harmony with the modern age, the right teachings of Islam, renewable thinking and globalization.