Russian president says Moscow has no intentions of engaging in military operations in Syria, but adds intensifying partnerships with Syria and regional allies is a possibility 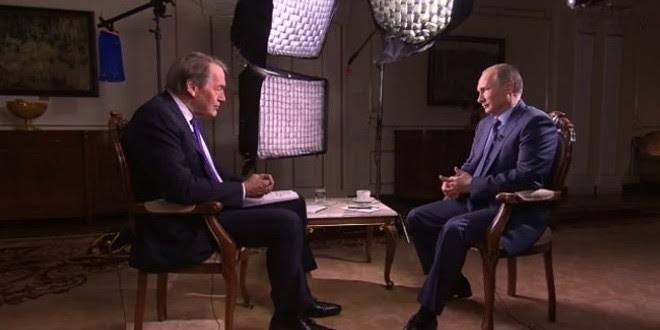 Russia’s army will not take part in any military operations in Syria, but is considering intensifying its work with President Bashar al-Assad and other partners in combating terrorism, Russian President Vladimir Putin stressed on Sunday.

In an interview with America’s CBS, President Putin said: “Russia will not participate in any troop operations in Syria or in any other states … Well, at least we don’t plan on it right now … But we are considering intensifying our work with both President Assad and with our partners in other countries.”

“The West has repeatedly said that the Syrian Arab Army is fighting against its people, but look at those who are in control of 60 percent of the territory in Syria … It’s controlled by either ISIS, Jabhat al-Nusra or by other terrorist organizations,” Putin added, using an acronym for the Islamic State.

“The question is: do you think that those who support the armed opposition, and mainly the terrorist organizations, are doing that just to topple President Assad without thinking about what will happen to the country after all the government institutions have been demolished?”

Responding to whether Russia is exerting new efforts to take a leading role in the Middle East, Putin said: “No. More than 2,000 fighters from Russia and ex-Soviet Republics are in the territory of Syria … There is a threat of their return to us … So instead of waiting for their return, we are better off helping President Assad fight them … this is the most important thing which encourages and pushes us to provide assistance to President Assad … And, in general, we want the situation in the region to stabilize.”