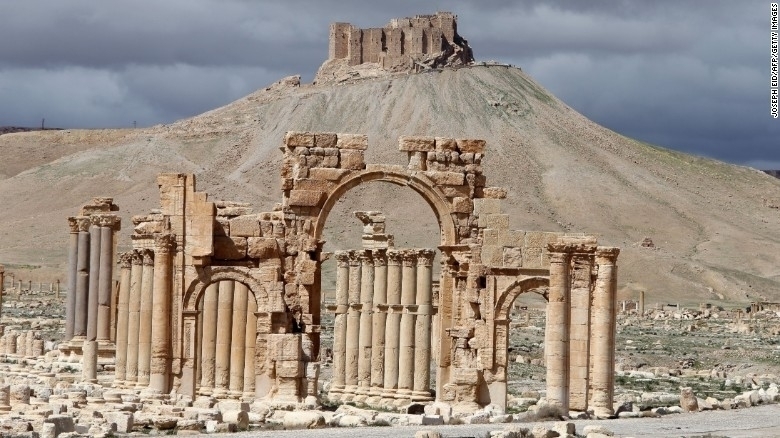 The 1,800-year-old arch was one of the most recognizable structures in Palmyra, which the fundamentalist group seized in May.

This demolition is one in a series of acts of vandalism inflicted by ISIS on ruins and historical sites in Palmyra after the group seized the city in May. Earlier in September, ISIS radicals destroyed three ancient tombs including the Tower of Elahbel, built in 103 AD and regarded as one of the finest examples its kind, in addition to the Tower of Iamliku and the Tower of Kitot.

ISIS militants in August also destroyed large parts of the ancient Temple of Bel, dating back to 32 AD, and the Temple of Baalshamin, while in early July, ISIS destroyed the 1,900-year-old Lion of Al-Lat statue in Palmyra.

UNESCO condemned the latest destruction of Syrian antiquities in the ancient desert city.

“This new destruction shows how terrified by history and culture the extremists are, because understanding the past undermines and delegitimizes the pretexts they use to justify these crimes and exposes them as expressions of pure hatred and ignorance. Palmyra symbolizes everything that extremists abhor; cultural diversity, intercultural dialogue, the encounter of different peoples in this center of trading between Europe and Asia,” UNESCO Director-General Irina Bokova said in a statement on Monday.

Ms. Bokova said that UNESCO reaffirms its determination to protect all that can be saved by relentlessly fighting against the illicit trafficking of cultural objects, documenting heritage and establishing networks to link the thousands of experts in Syria and abroad working to transmit this heritage, notably with the help of modern technology.

The Arch of Triumph, built by Septimius Severus between 193 and 211 AD, is a symbol of the city whose image has traveled around the world. A masterpiece of civil architecture and urban planning, the Arch was topped with geometric and floral ornaments. It marked the junction between the immense colonnades more than one kilometer in length and the Temple of Bel, also destroyed earlier this year.