Syria will certainly emerge victorious as long as its true friends continue to support the defense of its people, sovereignty, and unity, FM tells visiting Iranian delegation 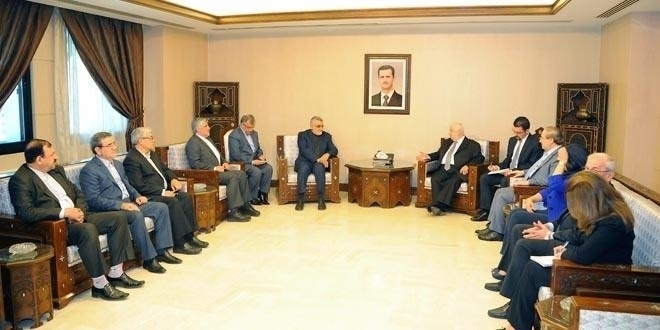 Foreign Minister Walid al-Muallem on Wednesday received Chairman of the Iranian Shura Council's Committee for Foreign Policy and National Security Alaeddin Boroujerdi to discuss developments in Syria and the region, stressing the importance of boosting bilateral relations and cooperation, particularly in combating terrorism.

Muallem asserted that the situation in the country is improving, largely due to the support from Russia, Lebanese Hezbollah and Iran, adding that Syria will certainly emerge victorious as long as its true friends continue supporting the defense of its people, sovereignty, and unity.

The minister also affirmed that the ideas posed by Iran regarding counter-terrorism and the political solutions for the crisis in Syria are appreciated and heeded by the Syrian government.

Boroujerdi, for his part, said that Iran is noticing a marked and constant improvement in the situation in Syria due to the steadfastness of its people and leadership.

The chairman stressed that Iran will continue to support Syria in all fields, and that it welcomes the anti-terrorism alliance between Iran, Syria, Iraq, and Russia, adding that this cooperation’s positive effects are beginning to materialize.

Boroujerdi said that the states which declare their intention to fight terrorism must support the alliance, because the US-led coalition has failed to achieve results against terrorism on the ground; instead leading to the spread of the ISIS and terrorist influence.