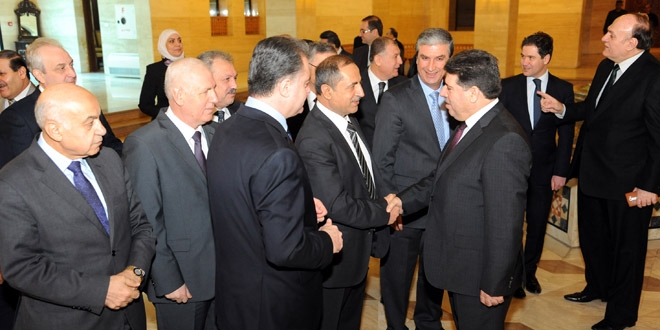 In its weekly session on Tuesday, Syria’s Cabinet discussed the performance of several economic and services sectors as well as steps to deal with daily challenges.

Chairing the session, Prime Minister Wael al-Halki called on the Internal Trade and Consumer Protection Ministry to monitor prices and the quality of products available in the local market, also stressing the need to find new markets in friendly countries for exporting Syrian products.

The PM also touched on efforts being made to amend the basic workers law, and said that the recent law on city planning and construction is an important step towards curbing illegal housing areas and increasing organized urban expansion.

In turn, Foreign Minister Walid al-Muallem briefed the Cabinet on recent political developments in the international arena and how they reflect on Syria, asserting that the political solution in Syria will be carried out in parallel with fighting terrorism, and that all those who bear arms against the Syrian state and people are terrorists.

Muallem affirmed that the Syrian state has a real desire to deal with international initiatives that work towards a political solution, and that the Syrian people alone will decide Syria’s future, reiterating that no one has the right to interfere in Syria’s internal affairs.