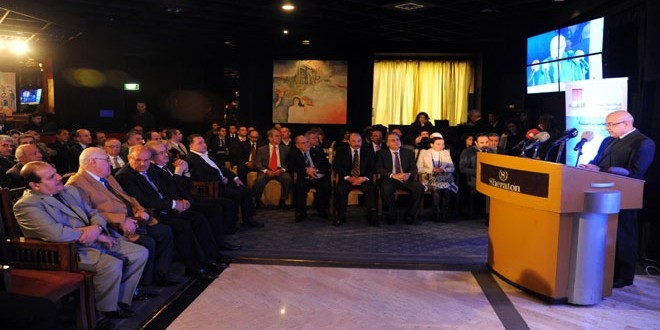 The first conference for banking and insurance kicked off in Damascus on Wednesday to discuss the role of insurance companies and banks as part of the national economy under the current crisis.

In a speech delivered at the opening of the conference, Finance Minister Ismael Ismael asserted that public and private banks have not ceased withdrawal operations despite all the challenges and the rumors that led to a sharp decline in liquidity in 2011 and 2012.

Ismael added that confidence in the banking sector had been restored at the beginning of 2013, explaining that the deposit rate has risen gradually, with the liquidity improving to reach 33 percent at the Real Estate Bank, 38 percent at the Commercial Bank and 35 percent at the Savings Bank.

Granting loans for small and medium projects have also been resumed, the minister said.

Ismael also hailed the performance of insurance companies under the unfair sanctions imposed on Syria, pointing out that insurance premiums in the first half of 2015 reached 10 billion Syrian pounds, an increase of over 16 percent.