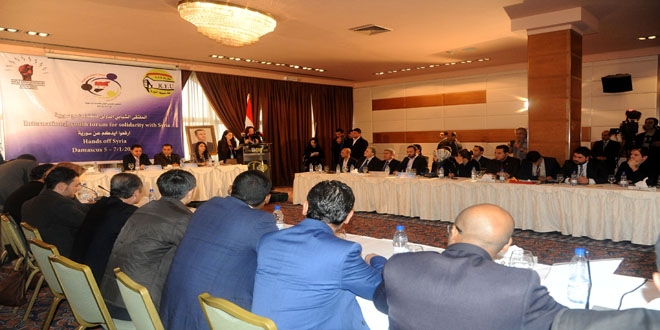 Activities of the International Youth Forum for Solidarity with Syria began Tuesday in Damascus under the slogan “Hands off Syria”.

Youth organizations from 20 Arab and foreign countries are taking part in the event, which is organized by the Revolutionary Youth Union (RYU).

As part of the forum’s activities, delegations form Lebanon, Iraq, Yemen, Palestine, Algeria, Egypt, Sudan, North Korea, Turkey, Germany, Netherlands, Ireland, Libya, Jordan and Comoros Islands are due to visit a number of sites in Damascus city, including the Ummayyad Mosque and the Unknown Soldier Monument.

Elif Ilhamoglu, Secretary of the World Anti-Imperialist Youth Union “WAYU”, expressed solidarity and support for Syria in the face of the imperialist campaign hatched against it.

Opening the forum, Ilhamoglu said delegates had come to express solidarity with Syria, voicing hope that the forum will help face attempts of partitioning, sedition and for defeating terrorism and extremism across the world.

Head of the RYU, Ma’an Abboud, told delegates: “What some Arab countries are witnessing of chaos, partitioning, sedition and terrorism is due to the so-called ‘Arab Spring’, which serves only the US and its allies, mainly Israel.”