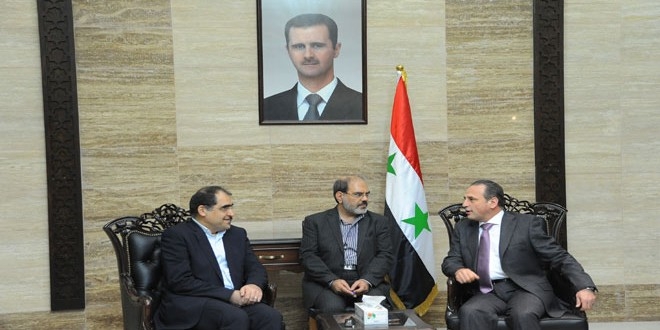 Yazigi stressed that Syria’s health ministry will work on overcoming any issues in fulfilling these deals, referring in particular to obstacles concerning the registration of medicines, in an effort to accelerate their legal import.

The Iranian minister explained that Iran will continue exporting Iranian-made medicines and medical equipment necessary to meet the needs of the Syrian people within a long-term strategy.

Speaking to reporters after the meeting, the Iranian minister said that the talks discussed different areas of health cooperation, mainly in the scientific field and exchange of medicines and medical supplies.

Yazigi also noted that an agreement was reached to grant scholarships for students and facilitate measures to speed up the importing of ambulances, in addition to holding short courses for training Syrian medical cadres in Iran.

Later, Hashemi met with Syrian Prime Minister Wael al-Halki, who briefed him on some of the major needs of the Syrian health sector, including special medicines and medical equipment, which could be supplied by Iran and other friendly countries.