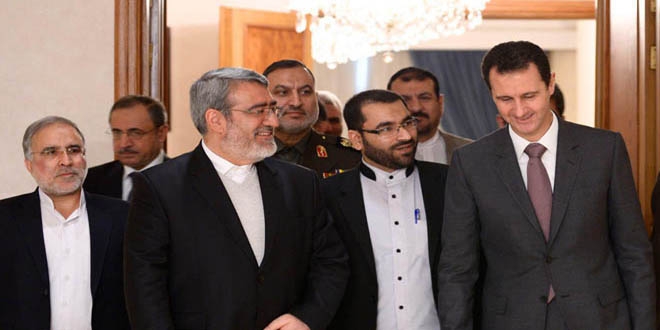 Iranian and Russian support in Syria's war against terrorism may play a role in determining the features of a new world map, President Bashar al-Assad declared during a meeting with Iranian Interior Minister Abdolreza Rahmani Fazli on Tuesday, January 12.

The deep-rooted strategic relationship between Iran and Syria was highlighted during the talks, which focused on discussing cooperation between the two countries in all fields, notably counter-terrorism.

Assad also voiced Syria’s appreciation for Iran’s support in facing terrorism, highlighting the important role that friendly countries, namely Iran and Russia, have played in fostering Syria’s steadfastness over the past five years, which may, to a large extent, determine the features of a new world map.

The Iranian minister, for his part, said the Syrian people are currently facing a fierce world war of terrorism and extremism, which risks extending beyond Syria and the region.

Earlier in November, Assad told Deputy Iranian Foreign Minister Hussein Amir Abdullahian that eliminating terrorism would be the major step for consolidating stability in the region and the world, and the real entry for the success of any Syrian-made political solution.