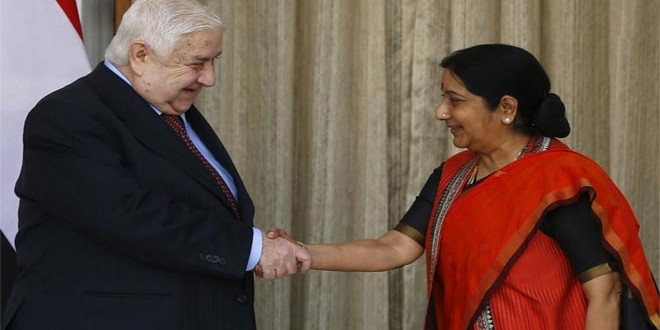 Syrian Foreign Minister Walid al-Muallem on Tuesday met with his Indian counterpart, Sushma Swaraj, as part of a four-day visit to India in an effort to enhance bilateral relations in the fields of electricity, petroleum, agriculture, technology and education.

Both sides agreed to fast-track cooperation and work to hold the Syrian-Indian joint committee meeting as soon as possible.

Briefing the Indian foreign minister on the situation in Syria and the region, Muallem affirmed that Syria will continue its efforts to combat terrorism and find a political solution to the crisis.

Muallem held those countries supporting terrorism responsible for prolonging instability inside Syria, saying that “a great deal of the crisis will end if Turkey, Saudi Arabia and other terrorism backers respected the UN Security Council's relevant resolutions and ceased their support to terrorism.”

Muallem asserted it is the right of the Syrian people alone to determine their future, adding: “Syria will not let the terrorists, who failed to achieve their goals by means of force, gain them through the political talks.”

For her part, Swaraj renewed India’s support for Syria in combating terrorism, welcoming the Russian-Syrian coordination in this field.

Swaraj also voiced her country’s support for the Syrian government’s efforts on both the political track and that of combating the Islamic State and other terrorist organizations.