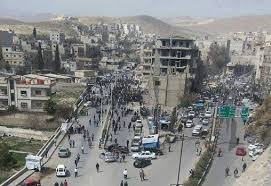 Activists have reported mounting cases of abduction and forced disappearance for blackmail in Al-Tall city, north of Damascus.

Victims have included teachers, doctors and other civilians, many of whom were released after paying a ransom of up to five million Syrian pounds ($22,700 USD).

Activist Khalid al-Rifai mentioned that members of armed formations in the area have used their power in the region to intimidate and abduct residents.

The activist added that Al-Tall, which shelters almost a million people, is suffering from a draining siege, worsened by the winter cold and hunger. But this has not stopped armed groups from threatening people with force with no supervision or judgment.

Rifai mentioned that most ransoms were paid without the victim’s families alerting the authorities, which makes it more difficult to locate the perpetrators.

The activist mentioned that most cases can be considered as individual acts by members of some revolutionary formations, but added rebel commanders do not do enough to stop the problem and punish those guilty.

Local activists have requested cooperation to create a security force under the supervision of the Free Syrian Army, to protect civilians and prevent the carrying of arms in public inside the city. The proposal was rejected by the armed groups, who accused activists of attempting to create a base for the regime's paramilitary National Defence Forces.