"The opposition delegation must be firm in its positions, standing with calm and steady nerves, and not get dragged into the agendas the regime is trying to impose and its attempts to provoke them" 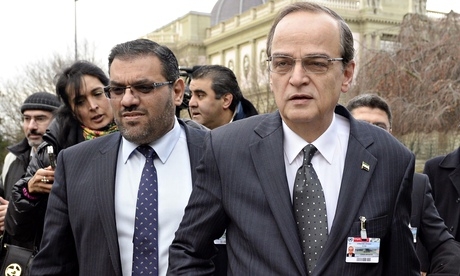 An opposition negotiator from Geneva II has warned the opposition High Committee for Negotiations of the Assad regime’s evasions to win time, recommending that the opposition stand with calm nerves and steadfastness.

Hadi al-Bahra, member of the main political opposition Syrian National Coalition and lead negotiator at the previous Geneva II conference, expressed his full support for the High Committee and the current opposition delegation in line with the documents of the Riyadh conference.

Speaking from Istanbul, Bahra recommended that “the opposition delegation be firm in its positions, standing with calm and steady nerves, and not get dragged into the agendas the regime is trying to impose and its attempts to provoke them. They should focus on the essence of the issue, and demand it, and the people will stand with them. They have weapons the regime delegation does not.”

Bahra, who has experience negotiating with the regime, continued: “The regime is used to evasion, and will play for time, and will not give away anything material or essential.”

He stressed that the High Committee's “position is clear: that they cannot accept any additional delegations, and that the negotiations must be between two parties, the first representing the Syrian people, and the second representing the regime’s government. It is not possible to define the choices of the opposition delegation. This is a Syrian decision, and is the basis of them going to the negotiations.”

Bahra said that withdrawing is an “available option” if the issues do not proceed as the negotiating delegation desires. “They must be firm in their positions, and not be dragged by the other party into other positions, and not permit more bloodshed,” he said.