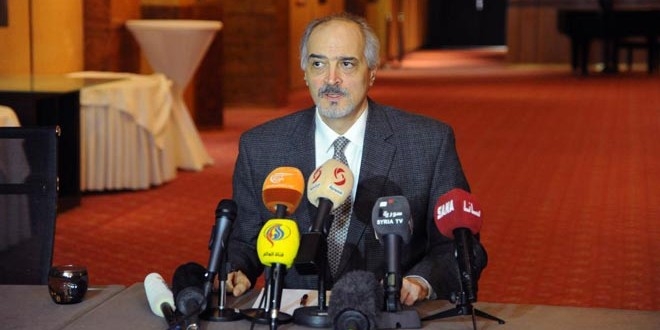 UN Special envoy for Syria Staffan de Mistura announced on Wednesday he would suspend the Syrian-Syrian talks in Geneva until February 25.

“I saw that negotiations should start, and they really started, and there should be more work to be done, not only by our side, but by the sides concerned in this crisis,” de Mistura told reporters.

Head of the Syrian government delegation in Geneva Dr. Bashar al-Jaafari said on Wednesday that “the masters of the [opposition] delegation; Saudi Arabia, Turkey and Qatar issued their orders, from the first moment, to make [the] Geneva meeting a failure, as they did at the Geneva II meeting,” adding that “there was a problem in the absence of a list about who were the opposition and who were the terrorists.”

“As a government, we have proven to the whole world our commitment, seriousness, discipline and sense of responsibility,” Jaafari said at a press conference.

He added: “We didn’t find one opposition, but a number of oppositions and contradicting groups among them and groups of persons who receive orders from external powers and masters.”

“You all have heard what de Mistura said to justify the suspension of the first exploratory round and the reason behind procedural problems… this part is correct, yes there are procedural problems since the first moment and even before sending the invitations to the sides concerned, the problems were who was the opposition and which was terrorism,” Jaafari said.

Jaafari says de Mistura, an experienced diplomat of almost half a century, avoided mentioning the opposition delegation decision to withdraw from Geneva following the arrival of National Coalition President Khaled Khoja and Riyad Hijab Wednesday morning. De Mistura was informed of the development and worked to save the track by announcing the suspension of the round.

De Mistura tried to save the opposition and himself from embarrassment in an attempt to lead the process in an even shape, he elaborated.

This behavior, Jaafari said, was irresponsible and unserious, adding that the opposition delegation “was not committed to the idea of coming to Geneva and engaging in indirect talks with the [Syrian government] delegation."