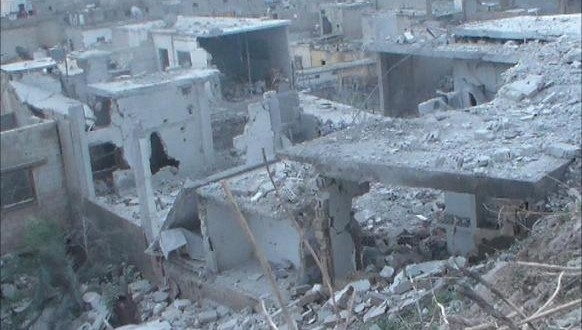 Syrian doctors and specialists have warned about the consequences of the United Nations ignoring the siege imposed by Assad’s forces with Russian support on the northern Homs countryside, describing the situation as a “disaster,” especially in light of the lack of response to the appeals of defenseless civilians.

A doctor in the central hospital in Telbeesa, Ahmed Abu Jumaa, said that “dozens of infants between one day and six months old are in serious need of baby milk, due to a total shortage for a month,” adding that the hospital had received 153 infants suffering from intestinal infections because of malnutrition from drinking cow and sheep milk.

Abu Jumaa said that since the start of the Russian air campaign on the northern Homs countryside and an increase in the bombardment, fear has caused most mothers’ natural milk to dry up, pushing residents to rely on synthetic milk, which has run out in pharmacies and health centers because of the blockade.

The doctor pointed to the appearance of new illnesses among children and elderly during the last two months, such as diseases in the lungs, respiratory tract and chest because of the lack of oxygen while they stay for long periods in bomb shelters with no air vents.

Pharmacist Abdel Latif al-Mahsoun said the area is suffering from a general lack of all medicines due to the blockade by Assad’s forces on the northern Homs countryside, adding that “the blockade threatens the lives of 1,800 people suffering from chronic diseases, especially the elderly, because of a lack of most types of medicine needed for their treatment."

"The necessary medicines for dialysis, blood pressure and diabetes have completely disappeared from the medical centers and pharmacies,” he added.