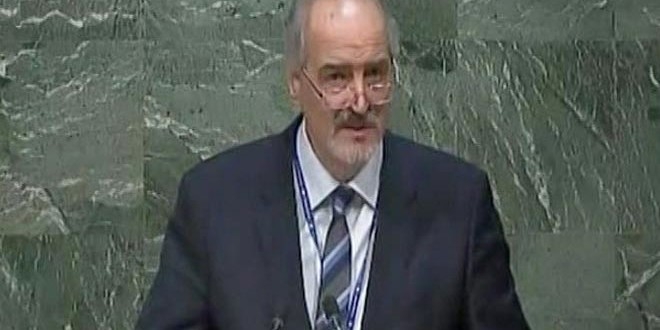 The Syrian government will not recognize the authority of the Independent International Commission of Inquiry on the Syrian Arab Republic, Syria’s permanent envoy to the United Nations Bashar al-Jaafari told an audience at the UN on Tuesday.

During a briefing from Commission members at an informal General Assembly meeting, Jaafari said that the selectivity and politicization in the commission’s reports and briefings rely on “fake narrations and misleading testimonies of some people out of the Syrian borders or fabricated reports of non-government organizations.”

“The commission ignored the testimonies of thousands of Syrians who are the victims of the terrorist organizations’ crimes,” Jaafari said, adding: “it also ignored the abundant information provided by the Syrian government to the United Nations since the beginning of the crisis through more than 600 official letters.”

Jaafari said he regretted that the Commission would come to resemble one of the mechanisms that had previously targeted the sovereignty, independence and stability of UN member countries under fabricated pretexts, after which, events have proven they were untrue.

The conflict in Syria, according to Jaafari, is not a war among Syrians, but rather a war against global terrorism and the countries that support it as they conduct their fight over Syria’s territory using terrorism as a political weapon.

“Doesn’t the Commission see that the biggest violation of human rights in Syria is supporting terrorism,” Jaafari asked.