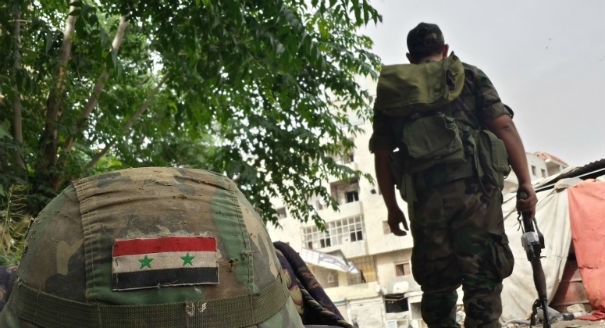 Media activists in the central Homs province have recorded 12 cases of cease-fire violations in the province’s northern countryside by regime forces and its allied militias since the truce entered into force on Saturday.

Al-Souria Net’s correspondent in Homs, Yaarib al-Dali, said that Shiite militias within the National Defense Forces were behind the violations, in addition to some fighters in regime military units and at checkpoints.

Our correspondent indicated that “the National Defense Forces militia in the majority-Shiite village of Nejmeh and the Jabourein village close to Telbeesa and Ghantou in the northern Homs countryside proceeded to set up mortars, 23-caliber machine guns, and shilka [anti-aircraft] vehicles, and target the outskirts of Telbeesa and nearby Ghantou, expressing their rebellion against the regime’s decision and their rejection of the truce."

In addition to this, Dali added, loyalist militias "have caused clashes with Syrian opposition factions on these fronts with the intention of dragging them into an open battle to break the cease-fire.”

Assad loyalists, meanwhile, on their Facebook pages expressed their certainty that “the truce is an opportunity for the opposition to organize its ranks and obtain quality weapons,” adding that a truce with those they described as “terrorists” had already failed. In the town of Rastan, militants in the engineering brigade from the village of Ghour al-Assi and the nearby Alamein, as well as volunteers in the National Defense Forces militia, proceeded to target Rastan with heavy machine guns, rejecting the truce, thereby bypassing the decisions of the brigade leader to cease fire.

Dali noted: “This is not the first time that the militias of Ghour al-Assi and Alamein and the other loyalist villages have imposed their decisions on the regime forces leadership. Militants from the agricultural village west of the besieged Waer district in Homs city had already broken the Waer truce and the Old Homs deal many times by shooting mortars, sniping at the residents and blocking the road with weapons.”