Syrian army is refraining from responding to breaches in order to give a chance to sustain the agreement, says Syria president 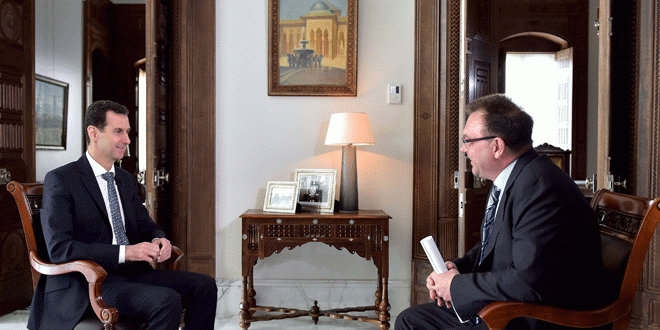 President Bashar al-Assad said the Syrian army has refrained from retaliating to truce violations in order to give the newly implemented cease-fire plan a chance, in an interview to be aired Tuesday.

Speaking to ARD German television, President Assad said that “terrorists have breached the deal from the first day. We as the Syrian army are refraining from responding in order to give a chance to sustain the agreement and that is what we can do. But in the end there are limits and it all depends on the other side.”

Assad said that rebels who are not affiliated with the Islamic State group or Nusra Front should give up their armaments if they wish to be accepted as civilians again. “Whether you want to join the political process or not… it doesn’t matter,” he said, adding that most important thing, legally and constitutionally, is that citizens are not allowed to possess weapons to hurt people or damage property. “This is the only thing that we ask,” he added.