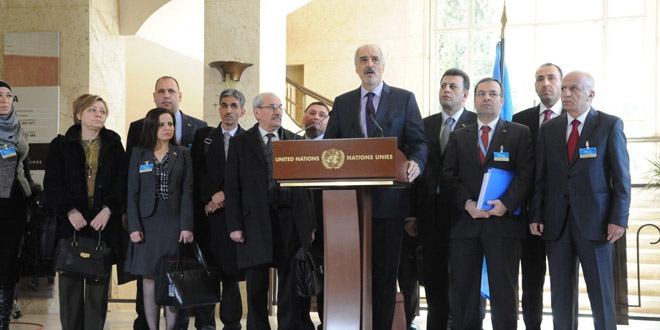 Head of the Syrian government delegation to the Geneva talks Dr. Bashar al-Jaafari said that the session held on Monday with UN Special Envoy for Syria Staffan de Mistura was “positive and constructive.”

In a statement to journalists following the meeting, Dr. Jaafari said: “We discussed in this session the importance and need for good preparation in terms of form, which would allow us to begin on a solid basis in order to discuss the substance and essence.”

He noted that there was a mutual agreement between the Syrian government delegation and the UN envoy regarding the importance of good preparation and a finalized vision of the dialogue’s framework.

Dr. Jaafari went on the explain that the importance of addressing issues such as circumventing gaps that were present in the first round of talks, who is on the list of names of participants, and treating all delegations equally.

“The dialogue was positive and constructive. We as the Syrian [government] delegation upheld our responsibility in helping to prepare well for the stage of transitioning from form to substance,” he explained.

“We will move now to the stage of preparing well for the second meeting with de Mistura which will take place on Wednesday,” Dr. Jaafari said.

In a similar statement to journalists, de Mistura said the meeting was useful and that it discussed procedural issues and resulted in deducing facts, adding that the meeting scheduled Wednesday will clarify some points, and that it will focus on the agenda which is based on Security Council resolution 2254.