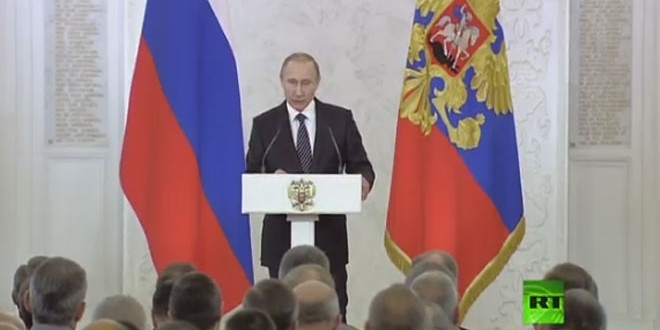 During a ceremony on Thursday awarding the Russian forces involved in the military operation in Syria, Putin said: “The decision to withdraw a substantial part of our military personnel and equipment [from Syria] has been coordinated with Syrian President Bashar al-Assad who was informed in advance about our plans and supported them.”

Putin explained that the work load of Russian air forces has dropped significantly following the cessation of hostilities agreement, adding that the number of sorties has decreased threefold.

Russia, he affirmed, will continue providing Syria with military and intelligence support.

“Of course, we will continue to support the legitimate Syrian government. It will be financial aid, arms supplies, military training… It will be intelligence support, aid in the planning of operations, as well as direct support,” said Putin.

“No one has the right to violate Syria’s sovereign airspace,” he said, adding that the Russian troops that will remain in Hmeimim air base will be protected.

“All partners have been notified and are aware that our air defense systems will be deployed against any targets that we will consider to be a threat for Russian service personnel. I stress that these will be any targets,” he clarified.