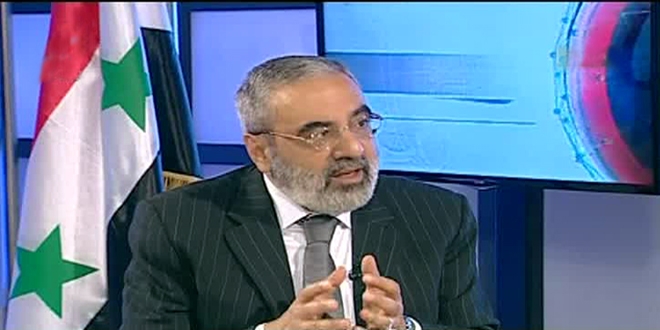 Information Minister Omran al-Zoubi stressed that any solution for ending the war on Syria must be based on respecting national sovereignty and public will.

In an interview given to Syrian TV on Saturday evening, Zoubi said “we will not permit the thwarting of the intra-Syrian dialogue in Geneva,” adding that “if the [opposition High Committee for Negotiations] delegation wants to maneuver and thwart the dialogue, then they will be held responsible for that.”

The minister said that the seriousness of the opposition delegation in moving towards a political process is very questionable, adding that only when the delegation breaks free of Saudi control will it be possible to listen to it.

The minister highlighted the issue of state financing of terrorism and Wahhabist ideology in Syria as a number of the opposition delegation members have been involved in the training, arming and funding of terrorists.

“We insist on ending the war in Syria, and this is a political and practical goal that we pursue on the ground by continuing to fight terrorism and expanding national reconciliations,” he said.

Zoubi also stressed the importance of acknowledging Syria’s sovereignty, territorial integrity, national unity and non-interference in Syria’s internal affairs in order to move ahead with the negotiations.