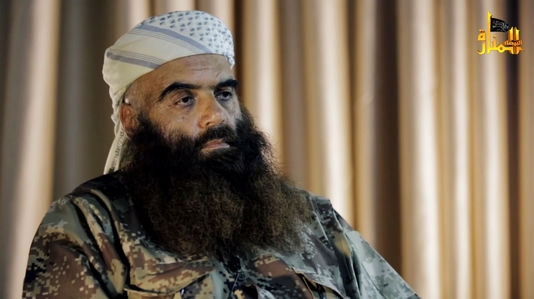 The death of Abou Firas al-Souri in a US air strike in Aleppo on Sunday was a big blow for jihadist movements and for Al-Qaeda’s Nusra Front.

The air raid hit a meeting place of high-level Al-Qaeda officials in Aleppo, northwest Syria, at which Souri was present.

Souri, who was a former major in the Syrian army discharged in the late 1970s because of his Islamist leanings, was a founding member of the Pakistani Lashkar-e-Toiba militant group and had fought in Afghanistan in the 1980s.

Radwan Nammous, Souri’s real name, was wanted by the US, Russian and Syrian intelligence services, according to intelligence in an archive of 1.7 million documents obtained by Zaman al-Wasl.

Other arrest warrants were issued against his sons, Firas, Huzaifa, Shrhabil, Mohammed and his two brothers, Atef and Abdul-Rahman.

After his discharge from the army, Souri joined jihadist movements in Afghanistan and in Syria in the 1980s. He later joined Al-Qaeda in Yemen.

Souri became a Nusra spokesman, but his strict and extremist views incited concerns among other armed groups coordinating with the Front.