Government forces attack Islamist militants and their supply lines in a number of cities including Aleppo, Homs and Daraa 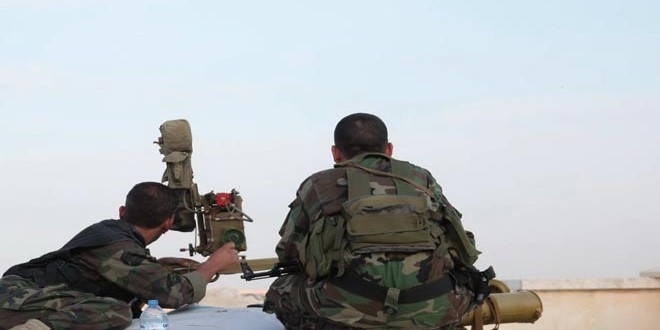 Syrian army units destroyed positions and vehicles belonging to the Islamic State group (ISIS) and the Nusra Front in the northern province of Aleppo and its countryside on Sunday, a military source told SANA.

Army units also destroyed Nusra positions and vehicles to the west of Khan Touman town and the two villages of Eis and Bawabia in the southern countryside of the province.

Meanwhile, a field source told SANA that the Syrian army backed by allied forces witnessed heavy clashes with Nusra-linked groups who attacked military positions in near Zitan town in the southern countryside of the province.

In Homs, Syrian airstrikes targeting ISIS in the southwestern countryside of Palmyra killed a number of militants and destroyed machine gun-equipped vehicles in the vicinity of the Hayr al-Gharbi Palace, which the group uses to store munitions and stolen artifacts.

Authorities recovered five archeological artifacts earlier Sunday which had been stolen from the National Museum in Palmyra by the hard-line group.

In Daraa, government forces thwarted an attack by Nusra-linked groups on military posts on the outskirts of Manshiyeh neighborhood in Daraa al-Balad, southern Daraa province.