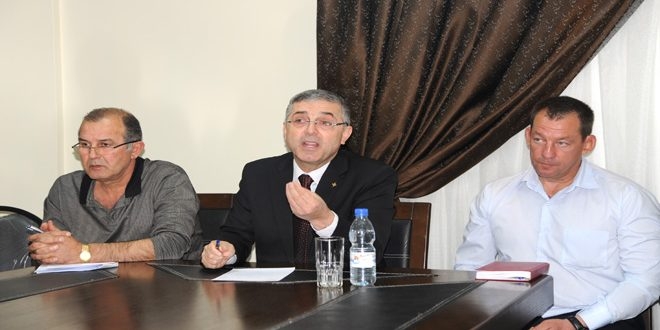 State Minister for National Reconciliation Affairs Dr. Ali Haidar stressed the importance of local reconciliations in the Qudsaya area, Damascus countryside, and the need to move forward in preparations for returning normal life to 600,000 residents.

During his meeting with a delegation of Qudsaya locals, which was also attended by a representative of the Russian Coordination Center in Hemeimeem, Haidar noted that the reconciliation will serve the interests of all Syrians and will help defeat the corrupt.

Haidar said that the government is interested in addressing citizens’ concerns, adding that reconciliations are the best way to increase social engagement with state establishments in combating terrorism.

Haidar said that successful reconciliations in Qudsaya will reflect positively on the nearby areas, particularly Al-Hamah and the extension of Souq Wadi Barada.

Means for settling the status of the militants, delivering aid to those in need and addressing all the negative aspects in the area were also discussed during the meeting.