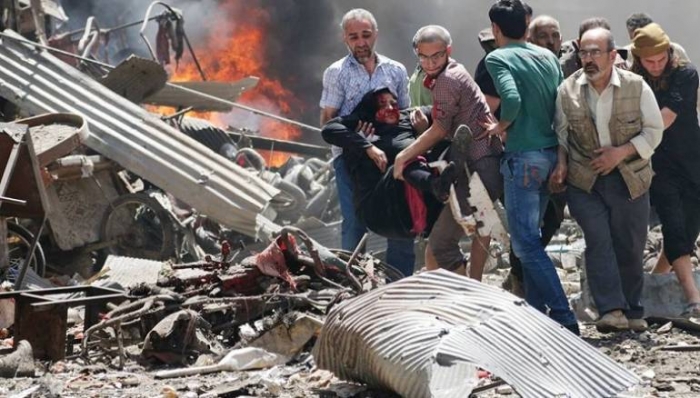 At least 35 civilians were killed on Tuesday in regime air strikes on two marketplaces in the northern Idleb province, activists told Zaman al-Wasl.

Around 28 people died and 35 others were wounded in Maarat Numan town when regime warplanes fired four vacuum missiles into a crowded marketplace.

The death toll is expected to rise as more victims remain under the rubble, he added.

President Bashar al-Assad's regime has been accused of more than 2,000 violations since the “cessation of hostilities” ceasefire deal went into effect on February 27.

Syrian state-run media said rockets fired by rebels had killed three children in nearby Kefraya, a Shiite town loyal to the government in Idleb province. All of the dead were members of one family.

Meanwhile, the opposition's High Negotiations Committee in Geneva said it is pulling out of formal mediation citing the worsening military situation in Syria.

The latest interruption to the on-off peace talks, brokered by the United Nations, follows escalating violence in northern Syria – especially around Aleppo – where a seven-week-old ceasefire has effectively collapsed.

Announcing Monday it was suspending its "formal participation in the Syrian peace talks," the Committee’s spokesman Salem al-Muslat said the group "remains fully committed to the political process and establishing peace through diplomacy."

The team would "remain in Geneva ready to engage in serious talks," Muslet added.

But earlier the group said it was "unacceptable" for negotiations to continue while the government of President Assad continued to "bombard and starve civilians," claiming that regime truce violations in the north numbered more than 2,000.

In turn, the Syrian government’s chief negotiator at the UN-led peace talks, Dr. Bashar al-Jaafari, said his team was pushing for an expanded government led by President Assad, adding that Assad's future is not up for negotiation.

Dr. Jaafari told Lebanese TV news channel Al Mayadeen that the larger government the regime is pushing for would preserve all the country's existing institutions.

In Geneva, he said, we have only one mandate to arrive at: an expanded national government. “This is our mandate … this is the goal we strive to achieve in the Geneva peace talks," Jaafari said.