Kurdish leader says the era of the Baath Party is over, adding his forces would be willing to fight Assad under a "secular, democratic and civilian umbrella" 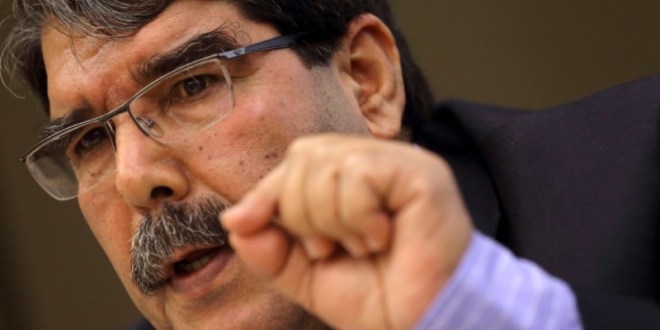 The head of the Kurdish Democratic Union Party (PYD), Saleh Muslim, said that the forces of the People’s Protection Units (YPG) are ready to fight the Syrian regime if the aim is to establish a secular, civilian, democratic state.

In an interview with the Saudi Arabian newspaper Okaz on Monday April 18, Muslim said that the YPG “are ready to fight Assad under a secular, democratic and civilian umbrella,” adding that “Assad is falling no matter how long it takes, and the era of the Baath (Party) is gone, never to return. But we do not want to establish a so-called caliphate and inaugurate the terrorist (and leader of the Islamic State group) Abu Bakr al-Baghdadi as president of Syria.”

“We are not willing to fight Assad so that Syria falls into the hands of jihadis, who have destroyed everything and turned it into a bloodbath,” Muslim added.

Regarding agreements with the Syrian regime, and its efforts to avoid fighting it on the frontlines, Muslim said: “There has never been a tacit agreement with the Assad regime. He’s the one who has arrested our people, and thrown them in prison up to today.” He added: “We’ve clashed with the regime in more than one area. As for its institutions in Hassakeh, it’s not our mission to destroy them if the regime does not attack us, because they are property of the people and not Assad in the end.”

Muslim denied that the federalism which was announced in March in the areas of Al-Jazira, Ain al-Arab (Kobani) and Afrin was a declaration of secession, saying it was a way to preserve Syria.