Despite reports by loyalist media of humanitarian aid entering the suburb, starving civilians forced to remain in besieged city and given only one loaf of bread 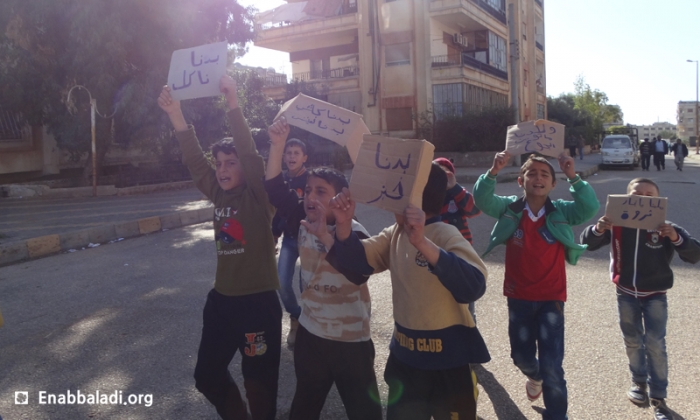 Enab Baladi’s reporter in Waer has denied reports by regime media regarding the entry of five aid convoys into the besieged Waer neighborhood in the west of Homs early Wednesday morning.

"The news the regime has been circulating is not true. Only a few trucks carrying some bread and medicine entered,” our reporter said, adding that "only a tiny amount of bread entered the neighborhood, and each person was given only one loaf.”

The media center in Waer confirmed that no humanitarian aid entered the neighborhood, also pointing out that the regime prevented cars that were filled with biscuits and peanut butter sent for the children, only photographing the vehicles by the checkpoint outside the neighborhood.

Our reporter also refuted claims by pro-regime media that all civilians were allowed to leave the neighborhood, explaining that only the families of a handful of workers were permitted to leave.

Institutions inside Waer issued a statement yesterday demanding the UN respond immediately to their calls for humanitarian assistance, and to announce who is responsible for the siege and preventing the entry of aid.

The aid delivery comes days after the death of four civilians, including two children, and the injury of many others after a bomb tore through the neighborhood on May 29.

Regime forces have imposed a brutal siege on Waer while preventing humanitarian aid convoys from reaching about 100,000 civilians.

Earlier this year, Waer witnessed an internationally-brokered truce between the regime and the opposition which broke soon after the regime refused to release detainees from the neighborhood – a main condition of the truce.