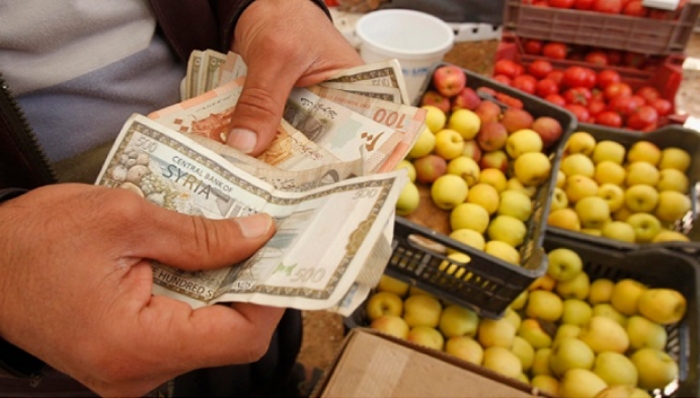 Consumer prices including food remained high despite the improved value of the Syrian pound over the dollar, causing general resentment in loyalist areas.

The pound recovered 20 percent of its value during the last month; however, consumer prices were not affected.

The dollar fell to 450 pounds in most Syrian cities after exceeding 625 pounds during the last two weeks as the cost of gold fell from 24,000 pounds to 18,000 pounds due to the Central Bank’s intervention measures.

Food prices have not yet recorded an easing with the retreat in the dollar value and the rise in the Syrian pound currency exchange rate.

Loyalist pages on social media accused the regime’s traders of being “ISIS ravaging the meat of the poor” while the Jableh News Network page said that traders are profiteering from food products.

The pro-regime Coastal News Network page expressed confusion with the current situation at the increase in the price of sugar and meats as the value of the pound improved, wondering: “Who can understand this and explain it?”

Mustafa al-Ahmad, an economic expert, said the current trend facing Syrians in pro-regime areas is the result of political and economic decisions.

He indicated that the prices of products in the Syrian market do not adhere to the principle of supply and demand but to the hegemony of merchants and political decision-makers.

Ahmad confirmed that the Assad regime is continuously rising the prices and has not decreased them, adding: “It is a message it is directing to its supporters with the aim of pressuring employees and students … to join the army where the salaries are higher.”