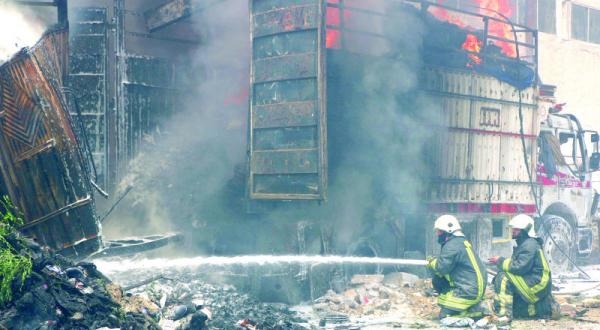 Iranian media revealed that another slaughter had hit Islamic Revolutionary Guard Corps IRGC troops located in Aleppo. This is considered the second wave of massive losses Iranian troops have suffered in Aleppo, Syria.

Quds Force’s special operations commander Jahangir Jafari Naya was reportedly killed in southern Aleppo city. Meanwhile, Syrian opposition sources confirmed that over 50 Iranian officers, and a fighter, have died in a Nusra Front shelling. In the attack, 13 other Iranian members were apprehended.

The Quds Force is a Special Forces unit of Iran’s Revolutionary Guards responsible for their extraterritorial operations.

The former massacre in Khan Touman last May had also cost the Iranian interference in Syria dozens of IRGC officers.

On the other hand, the Syrian Observatory for Human Rights revealed that the Russian-backed Assad regime forces, for the first time in two years, have entered Raqqa province—the zone has been considered an ISIS-held stronghold.

Moreover, a Free Syrian Army general denied all Russian information claiming that 2,000 extremists are gathering near north Aleppo, he confirmed that no extremists exist among the ranks of rebels, and that the sole extremists are ISIS terrorists.

Media Activist Manbaj Ahmed Mohammed said that 10 civilians among which four belong to the same family were killed and over 17 others injured Saturday night. The casualties were caused by the U.S.-led coalition offensive against ISIS-held land in the rural areas of Manbij city in Syria.

Since the offensive began on May 30, forces have captured more than 100 square kilometres of territory, Air Force Col. Pat Ryder, U.S. Central Command spokesman, stated at a weekly media briefing on Friday.