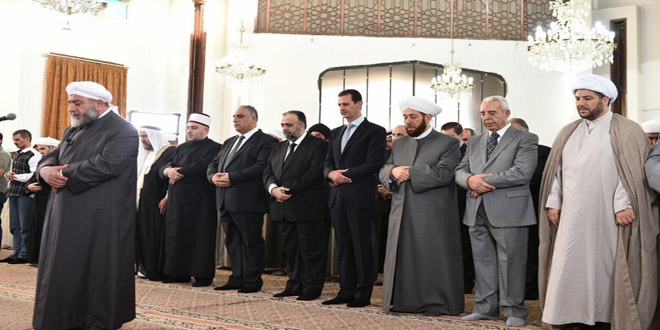 President Bashar al-Assad and a number of high-ranking officials attended Eid al-Fitr prayers in Homs’ Safa Mosque on Wednesday to mark an end to the holy month of Ramadan.

Sheikh Issam al-Masri, who led the prayers, addressed Assad saying that the people of Syria were glad to see the president on the frontlines of Eastern Ghouta breaking fast with members of the Syrian army on June 27.

“Today Homs is extremely happy and honored to have you here,” added Masri, stressing that “the religious family in the city of Khalid Ibn al-Walid will continue to stand by you and defend its homeland and religion.”

The sheikh also stressed to his audience that the president had repeatedly warned the world of the danger of terrorism and its backers, adding that terrorism is now backfiring on those who failed to heed his warning.

Masri also voiced hoped that all Syria’s provinces will soon recover thanks to the president’s wisdom and the heroic achievements of the Syrian army.