Leader of Syria’s Tomorrow movement is in France to work on meeting the demands of Syrians and establishing direct relations with friendly nations, according to general secretariat 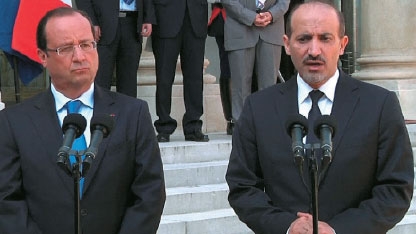 The head of the opposition Syria’s Tomorrow movement, Ahmad Jarba, has arrived in the French capital Paris, bringing with him a comprehensive vision for a political solution and process in Syria. The Egyptian newspaper al-Youm al-Sabae website reported confirmation from a member of the general secretariat for the movement, Qassem al-Khateeb, that France, since the start of the so-called “Syrian revolution,” has been trying to “assist it and assist the Syrian people” and its position stems from “the tyranny of the regime in Syria,” according to him.

Confirming the dubious role of Paris in stoking the Syrian crisis and its involvement in supporting terrorist groups in Syria, Khateeb noted Paris’ role in supporting the “local councils” which were formed inside Syria and the “liberated areas” which are controlled by the “Free Syrian Army” militia, describing it as the “first European nation” to become active in this field. Khateeb said that Jarba was visiting France for the first time since forming the movement, adding that he had visited France a number of times and met with the French president when Jarba was head of the opposition “(Syrian National) Coalition.” He said the movement was working on meeting the demands of Syrians and working constantly to establish direct relations with active nations and the so-called “friends of the Syrian people,” and consulting with them around the latest developments in politics and on the ground in Syria.

Khateeb said that France was an active power in the “international coalition” to fight terrorism, as it was one of those most affected by it, adding that the Syria’s Tomorrow movement was looking forward to European action to achieve bringing humanitarian and medical aid into the blockaded cities and towns, adding that French diplomats were “always active in the Syrian issue.”

Khateeb said that the movement, represented in person by its visiting president in Paris, was bringing a comprehensive political vision regarding the solution and political process which has stalled because of the “intransigence of the Syrian regime,” and a lack of international seriousness in finding a solution to the tragedy affecting Syrians. He claimed that the French and the French people were the first to open their doors to receiving Syrians fleeing what he called “the regime and the forces of oppression” and that France worked toward resettling and giving entry visas to Syrians to its territory through official routes and not through illegal immigration.