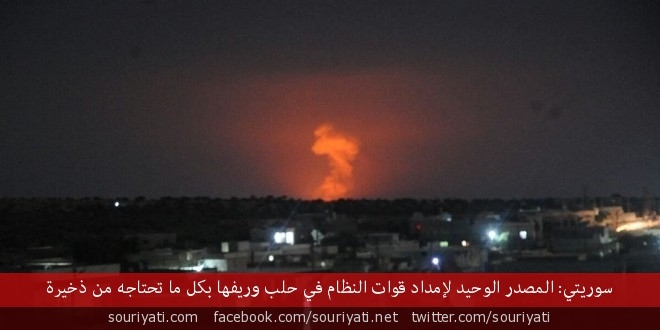 Social media pages were inundated on Saturday evening with news of huge explosions at Factory 790, or the so-called defense factories of the regime forces in the Aleppo countryside.

The news created jubilation among opponents of the Assad regime as these workshops they are used to manufacture munitions for bombing opposition villages in the Aleppo and Idleb provinces and the Syrian desert areas (Raqqa and Hama countrysides). They are the primary source of ammunition and the production of barrel bombs which regime helicopters drop, as well as ammunition for medium and light weapons, artillery shells, and Grad rockets, with the exception of guided munitions.

Several accounts circulated about the reason for these huge explosions, which activists told Al-Souria Net were heard from a distance of more than 50 kilometers from the Al-Safira area where the factories are located.

Abdullah al-Hamdan, a flight colonel who defected from the regime, said that the reason for the explosion was that a regime aircraft crashed during its takeoff while carrying a heavy load, which led it to collide into one of the hangars for storing ammunition and materials to produce explosives like gunpowder and TNT.

However loyalist social media pages said the reason for the explosions at the defense factories was high temperature and fluctuations in climate, saying that the losses were material, and that there was no truth to the news that 150 people from loyalist militias had died.

Opposition activists said that dozens of soldiers and workers in the factories were killed due to the force of the explosions, with more than 20 explosions occurring in a wide area inside the factory.

The factories are the main departure point for regime helicopters in northern Syria, as well as occupying an important strategic position because of the nearby al-Neerab military airbase, the international Aleppo airport, factories for cables, ceramics, batteries and tractors, as well as the thermal energy plant.

The importance of the defense factories is increased by the presence of the nearby “scientific research” facility, which enjoys high-level protection, with an air base responsible for defending it. This base contains sophisticated long-range rockets, ground-ground missiles and surface-to-air missiles.

The vast desert area on its southern side is open and empty up to Khanasar, which is about 60 kilometers away and overlooks the regime forces’ supply route to the Hama military airport and the central and coastal regions.