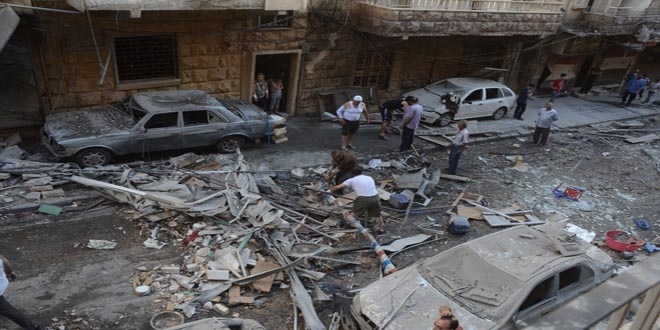 Terrorist rocket attacks against residential neighborhoods in Aleppo have killed three people, including a child and two women, and also injured 15 others, a police source confirmed on Sunday.

A source at the Aleppo Police Command told state news agency SANA that armed terrorist groups targeted the neighborhood of al-Neel Street with a number of rockets, killing a child and two women while also injuring five others.

The source added that five civilians were also injured and a number of cars were burnt in a rocket attack against the Muhafaza neighborhood.

Two civilians were also injured after terrorist groups targeted the Aziziyeh neighborhood with rockets, while two other civilians were injured in the area surrounding University Square.

On Saturday, five civilians were killed, including two brothers and two women, and nine others were injured in terrorist rocket attacks against a number of neighborhoods in Aleppo.