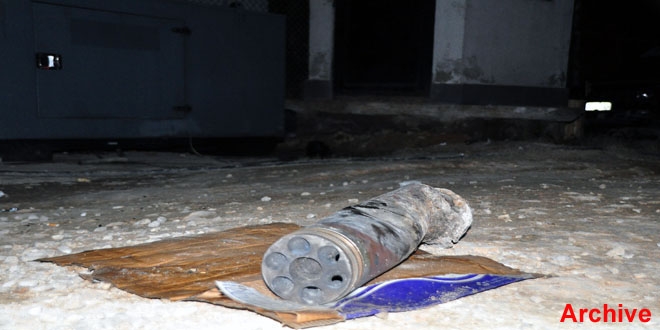 Nine civilians, including six children, were injured in a terrorist attack when two rockets landed in the area surrounding Saadallah al-Jabiri square in Aleppo city.

An Aleppo police command source told a SANA reporter that two rockets fired by terrorist groups fell near Saadallah al-Jabiri square in Aleppo, injuring nine civilians, including six children. Some are in a critical condition.

On Sunday, a female child and a woman were killed, and four other persons were injured, when shells launched by terrorists fell on the al-Rowad residential association area 606 in al-Hamadaniyeh, in the neighborhood of New Aleppo, the area around the municipal palace, and Saadallah al-Jabiri Sqaure.

A SANA reporter in Homs said that terrorist groups affiliated to the ISIS terrorist organization targeted Abu al-Alaya village in the Jub al-Jarrah area, 73 kilometers to the east of Homs, with a number of rockets, causing material damage to locals’ houses and properties.

Terrorist groups affiliated to the ISIS terrorist organization are active in a number of villages extending from the eastern borders of Homs and Hama provinces and attack safe areas with shells and machine guns, killing a number of civilians, including women and children.