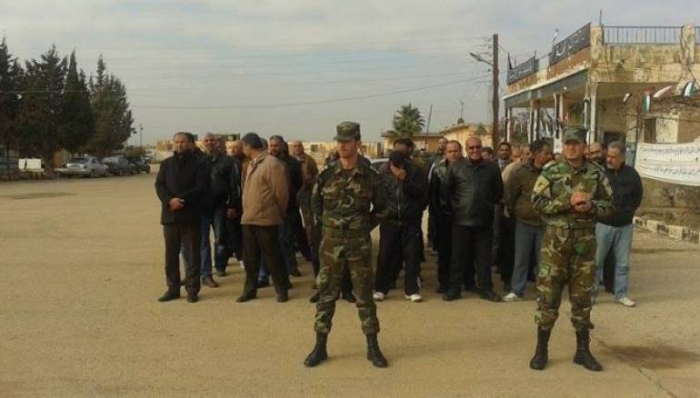 The Syrian regime is putting pressure on employees by using their need for work and a source of income to force them to join self-defense courses in order to participate in its war against the Syrian people.

Abou Aziz, in his fifties, told Iqtissad that he only had two years left until he would be entitled for paid retirement, but his boss nominated him to join self-defense courses. He was put in a dilemma: whether to keep his job and join the courses, which would force him to kill his own people, or refuse the courses, which would cost him his job. He preferred to go for the latter option and quit his job.

“I have a small piece of land. I plant it to get some money, and my son sends me some money from his work in Jordan. At least I now have a peace of mind that I would not be forced to fight against or harm other people,” Abou Aziz explained.

A well-informed source in Daraa confirmed that attending self-defense courses has become mandatory for all employees, as there are memoranda and official orders in this regard. Whoever refuses to take these courses will face legal consequences, as well as harassment at checkpoints and in his day-to-day life.

The source reported that employees over the age of 40 are chosen for such courses, because those who are younger are conscripted and placed in training courses in regime camps to fight the Syrian people.

According to the source, self-defense courses have been initiated in many Syrian provinces and they are financed by Rami Makhlouf (a cousin to the Syrian president) although they are organized by the Baath Party. In the beginning, they were voluntary. But people were not interested in joining them, so the regime forced employees to join them.

Mohammed, an employee in the land registry administration in Daraa, mentioned that he was forced to join a self-defense course, in which he was taught how to use, assemble, disassemble, and clean individual arms like Kalashnikovs, as well as physical training and educational and political lectures about the situation in Syria, to encourage attendees to fighting rebels and armed groups.

Mohammed added that each person who joins a self-defense course is considered as having a contract with the specific military forces and receives additional money equal to about half of his basic salary. He noted that many employees have no option but to join courses to keep their jobs, which are the only source of income they have to spend on their families. Moreover, others have been forced to sign contracts with the regime to receive a salary of around 30,000 Syrian pounds.

Mohammed confirmed that most voluntary contractors are regime supporters and loyalists. He noted that many women started joining these courses, especially regime supporters, who are allocated administrative work.

Abdullah, an employee who attended the self-defense courses but fled before it ended, confirmed: “attendees of those courses are requested to substitute for regime forces at checkpoints when there is a need for that, to inspect and search people, and to support regimes forces in their attempts to arrest wanted civilians. Trained employees are also ordered to maintain security in truce areas and in areas regained by the regime from rebels.”

A Free Syrian Army source confirmed that self-defense courses are evidence that regime has run out of resources and is unable to sustain itself for long due to heavy losses it has taken from the Syrian resistance. The source noted that regime forces in Daraa suffer from low morale due to daily attacks they receive by rebels.

The FSA’s source mentioned that the regime pushes men of old age to face rebels at checkpoints to protect its forces, but that would not prevent rebels from attacking regime forces, whoever is serving in them.