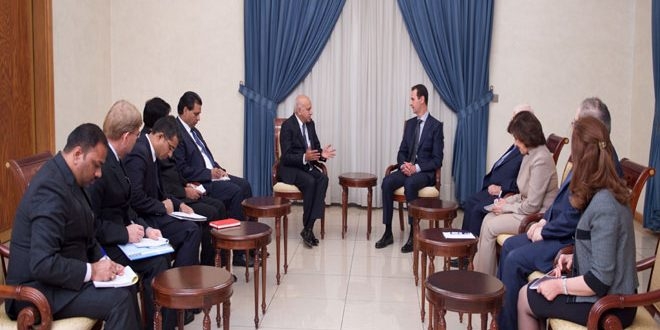 Foreign states are using terrorism to obstruct efforts at securing a political solution in Syria that would bring an end to over five years of violence and bloodshed, according to President Bashar al-Assad.

Assad’s remarks came during a meeting with Indian Minister of State for External Affairs Mubashir Javed Akbar on Saturday in which they discussed the dangers of terrorism on the region and the world.

President Assad said the fact that many friendly countries, including India, have stood by the Syrian people has concretely reflected on boosting Syria’s steadfastness in the face of the war waged against it by foreign and regional states.

These states, he said, have used terrorist organizations in their war on Syria, supporting them in various ways, and have so far worked on obstructing efforts at finding a peaceful solution that would bring the bloodshed and destruction to an end.

The Indian official, for his part, highlighted the importance of cooperation with Syria in the field of combating terrorism.

Akbar underlined that it would be a mistake not to realize the dangers of terrorism and its aim of spreading death and extremism, jeopardizing world stability and destroying the human civilization.

He stressed that India is ready to offer all that could help in alleviating the suffering of the Syrian people and contribute to the development and reconstruction of Syria.