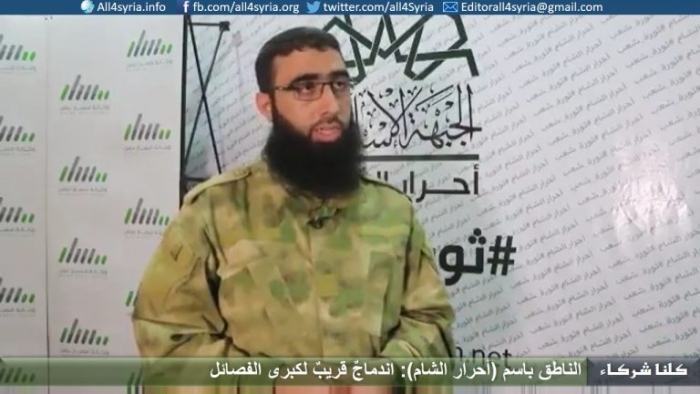 The military spokesman for the Ahrar al-Sham Islamic movement, Abou Youssef al-Muhajir, said that a merger was close for the biggest rebel groups operating in Syria.

Muhajir said in a video recording published by activists on social media that, “Preparatory sessions for major integrations projects on the Syria-wide level are underway,” adding: “There will be unification and mergers among the biggest Syrian revolutionary groups, and the results will come very soon.”

In a press conference Muhajir gave yesterday, he said that the Jaish al-Fatah (Army of Conquest) Operations Rooms was preparing to launch a new attack in the southern Aleppo countryside, and that the goal of the new operations was to secure the road which connects Aleppo’s eastern districts to the outside of the city.

The Ahrar al-Sham spokesman said that Jaish al-Fatah forces had stopped their advance about 20 days ago to repulse the approaching regime forces, who were trying daily to storm points which the rebels control in order to re-close the Aleppo road. He said that they had not been put under any pressure from any international group because they do not receive any support from any foreign groups.

Abou Youssef said that at least 170 regime fighters had been killed over the last three days alone during their attempt to restore control over the crossing which connects Aleppo to the outside.