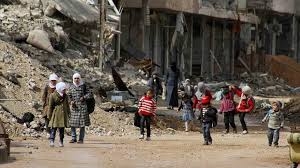 Steffan de Mistura demanded Friday that people of Daraya be protected in any evacuation that takes place, and that this takes place voluntarily.

The Special Envoy said in a statement issued by his office in Geneva that the UN was not consulted or involved in the negotiation of this agreement.

A deal has been reached to allow rebel fighters and civilians to leave the Syrian town of Daraya, which has been under government siege since 2012.

The evacuation of the town, near the capital Damascus, is expected to begin on Friday. Syrian Red Crescent vehicles are poised to enter the town.

De Mistura's office said in the statement, "The situation regarding Daraya is extremely grave. It is tragic that repeated appeals to lift the siege of Daraya, besieged since November 2012, and cease the fighting, have never been heeded.

"The Special Envoy has been made aware overnight of an agreement to evacuate residents, both civilians and fighters, starting today. The UN was not consulted or involved in the negotiation of this agreement.

"It is imperative that people of Daraya are protected in any evacuation that takes place, and that this takes place voluntarily.

"The Special Envoy strongly appeals to the co-chairs of the International Syria Support Group (ISSG) and co-sponsors of the Cessation of Hostilities and other ISSG members to ensure that the implementation of this agreement and its aftermath is in full compliance with international humanitarian law and protection standards.

A UN humanitarian team is reaching out to all parties, including the local population. The world is watching."

Residents of Daraya have faced near-constant bombardment and shortages of food, water and power.

Civilians received their first supplies in four years only in June.

According to the BBC, this comes as US Secretary of State John Kerry holds talks on Syria with his Russian counterpart Sergei Lavrov in Geneva.