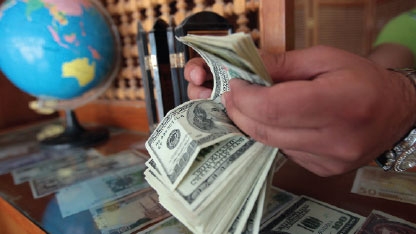 Banks working in the sector said the reason behind the drop in the dollar exchange rate against the pound was due to international factors because of the rising interest in Europe, which lead to a decline of the price of the euro, resulting in a decrease of the price of the dollar, which was accompanied by an increase in the price of gold. It was also due to local factors, including the stopping of Resolution 601 which subjected all imports to a security deposit in Syrian pounds of 25 percent of the value of the project’s import license or approval, which led to the disruption of many traders’ import licenses as they waited for new mechanisms, thereby culminating in a decrease in the dollar and a decrease in the exchange rate.

The source expected that the decrease in the exchange rate will continue slightly in the current period, followed by stability for a time, commensurate with the measures and how well implemented they are, and the readiness of the Real Estate Bank of Syria to fund imports in implementing the Central Bank resolution in this respect. The head of the bank, Ahmed al-Albi, told Al-Watan that the bank was fully ready in terms of staff and working mechanisms to sell foreign currency for non-commercial purposes, in accordance with the systems in force and the regulations set by the Central Bank.

He said that the bank can meet the needs of importers with regards to demand for foreign currency for non-commercial purposes but that it could not carry out foreign transactions in light of sanctions imposed upon it. Meanwhile the head of the Commercial Bank of Syria, Faris Suleiman, was surprised by questions about the extent of the readiness and preparation of the Commercial Bank to meet this task in terms of qualified staff and working mechanisms and on the issuance of any instructions regarding the Syrian Commercial Bank in this respect. He said that the question shows a lack of knowledge about the Commercial Bank’s work and capabilities. He said that the bank since its foundation has had among the basics of its work funding foreign and domestic commercial activity by various accepted banking means (transfers, credits, guarantees, bills) and accordingly it is natural and self-evident that its staff would be experienced and professionally capable and the working mechanisms are in this current framework.

The Commercial Bank contributes to the relative stability whether on the part of financing importers in the public and private sector, and for all the necessary commodity requirements and basics such as food, medicine, and petroleum products, at the prices issued by the bank for the dollar and euro, and that the financial authorities had a primary role in achieving stability for the rates in the measures they carry out and the issuance of decisions which contribute to the creation of the required balances in various respects. The responsibility of these authorities is working to support the steadfastness of the pound — like purchase value, and its exchange rate against the main circulating currencies — and in this framework came the decision issued by the Central Bank. The Central Bank is ready and is capable to work with its guarantee of coordinating with the Commercial Bank of Syria.

He said that there was no doubt that the economic blockade on Syria and the oppressive sanctions on the Commercial Bank since the start of the war on Syria especially had “serious” effects on the activity and work of the bank and its role in funding foreign trade. But after these five years of blockade and sanctions, the bank has no choice but to create alternatives.