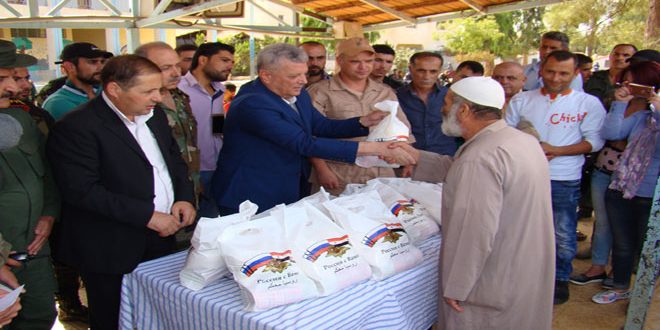 A new batch of food aid provided by Russia was distributed on Wednesday to displaced families residing in makeshift housing in the Vanguards Camp in the town of Rasas, Suweida province.

Speaking during the occasion, Swueida Governor Amer Ibrahim al-Eshi said that the aid reflected Russia’s support for the Syrian people in the face of terrorism and the aggressive war waged against their country.

In turn, representative of the Russian ceasefire monitoring center at Hmeimim Alexi Ivanov pointed out the aid aims at alleviating the suffering of the Syrians due to the current crisis, hoping that security and safety will soon be restored to Syria.