Pharmacist says chemists are exploiting the lack of medicine in the capital to raise prices, sometimes increasing costs by twice the actual price 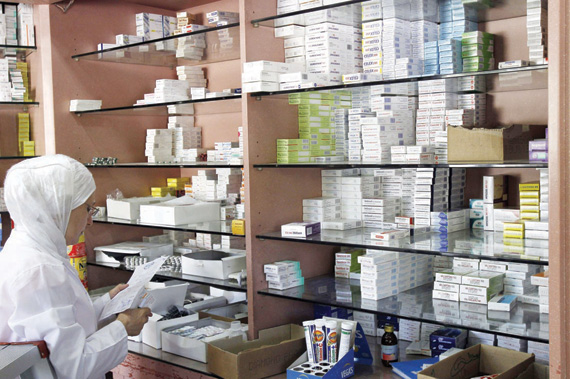 Syria’s pharmaceutical markets are witnessing “chaos,” according to observers, as corrupted medication, whether expired or smuggled from abroad, floods the market as medicine stocks continue to dwindle in the country.

The pharmacy union in Damascus attributed the reason for the lack of some medicines to, “the rise in production costs because of the increase in the prices of petroleum products and production inputs like glass and cardboard, as well as the difficulty of securing basic items as a result of the unjust economic blockade, and the increase of prices of basic items because of the rise in the exchange rate of the dollar.”

Media close to the regime on Saturday quoted pharmacy union chairman in Damascus Mahmoud Hassan al-Hassan as saying: “A number of factories and medical labs have been hit by armed terrorist groups in several provinces and a number of them fall in hotspots and unsafe areas, and so it has made it hard to transport medicine between the provinces and throttled the export process. These are all reasons behind the shortfall and absence of some drugs.”

He added: “The union is cooperating with the Health Ministry and its directorates and the council of pharmaceutical affairs in visits to pharmacies in all the provinces with the aim of getting a realistic estimate of the presence of unofficial drugs, whether manufactured domestically without a license or smuggled in. It is confiscating drugs, destroying them, and imposing the law against the violators.”

The chairman’s comments come in light of the increase in medicine prices and the variation of prices between pharmacies. Dr. Hossam M., who owns a pharmacy in one of the Damascus districts, told ARA News: “The pharmacies are exploiting the lack of medicine to raise the prices, and sometimes these increases may be twice the real price of the medicine. For example, one of the auditors who asked about a packet of tryptizol (used to treat a number of mental illnesses) in one of the pharmacies found its price was 1,200 Syrian pounds. So he went to another pharmacy nearby and to his surprise the price was 2,000 Syrian pounds.”

The war which Syria has been undergoing for more than five years has seen the burning, destruction and closure of a large number of medicine factories in Syria.