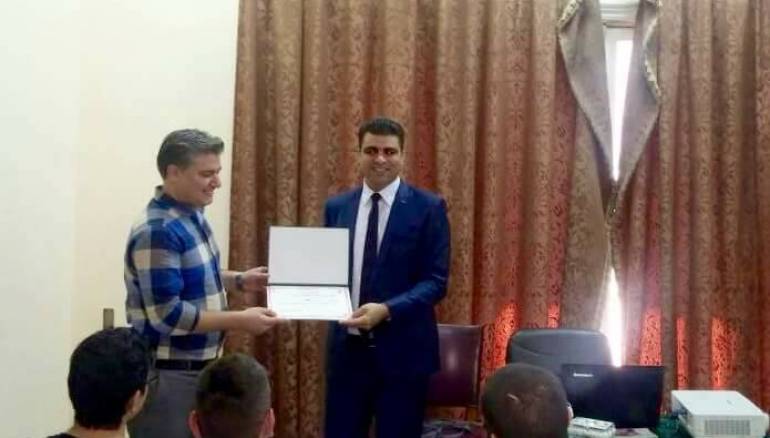 A group of Syrian students have honored Dr. Amar al-Mustafa as the first Syrian refugee to obtain a doctorate degree in Egypt in the English language.

Born in Karnaz in the Hama countryside and a graduate of Aleppo University, Mustafa was awarded a doctorate degree with first class honors in English linguistics and translation from Helwan University, Cairo.

His research is an expanded academic discussion of the media and news language in the foreign and Arabic press during the Arab Spring, with a specific focus on Libya.

As he began his project in 2011, when the Syrian revolution was at its beginnings, his supervisor had insisted on focusing on Libya due to the deep international media coverage of the conflict in 2011, specifically in regards to the Libyan revolution and the ensuing NATO intervention, as well as Muammar Gaddafi’s escape.

Mustafa’s research focuses on 67 European and American newspapers and around 40 Arabic newspapers with the aim of understanding how media is used to serve a particular ideology. According to al-Mustafa, the research aims at highlighting the general framework for how linguistic elements are used to present different actors negatively or positively according to the newspaper’s ideology.

“News language in foreign and Arab journalism is connected tightly with the institutional politics and ideology of the newspaper or country the journalist publishes in,” Mustafa said.