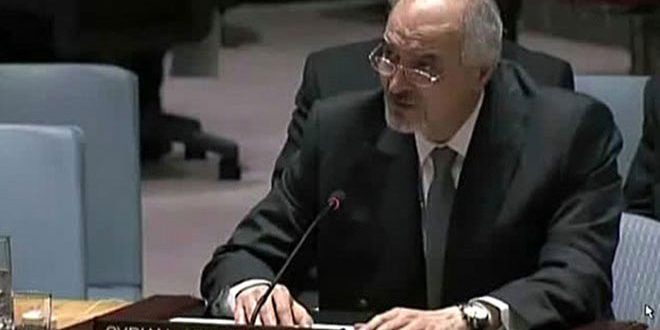 Syria’s Permanent Representative to the UN Bashar al-Jaafari strongly condemned the UN’s insistence on not tackling the situation in the occupied Syrian Golan, pointing to Israel’s disregard of hundreds of the UN resolutions and its violations of international humanitarian law and human rights law.

In a statement before the UN Security Council on the “situation in the Middle East including the Palestinian cause,” Jaafari said that Syria strongly condemns the UN special coordinator for the Middle East Nickolay Mladenov’s insistence on not tackling the situation in the occupied Syrian Golan Heights and the stance of the UN towards Israel’s occupation of the area.

The top Syrian diplomat spoke of the continued Israeli settlement campaigns, in which Palestinians are expelled from their homes, as well as Israel’s complete disregard of the UN resolutions relevant to ending the Israeli occupation.

Jaafari indicated that for more than half a century, some of the UN member states have been supporting Israel in its occupation of the Arab territories by vetoing more than 44 draft resolutions since the establishment of the UN surrounding the Arab-Israeli conflict.

He added that for more than half a century, the Syrian civilians in the occupied Golan Heights have been suffering from policies of oppression, racial discrimination, arrest and torture, as well as being prevented from building Syrian hospitals in their occupied towns in the Golan.