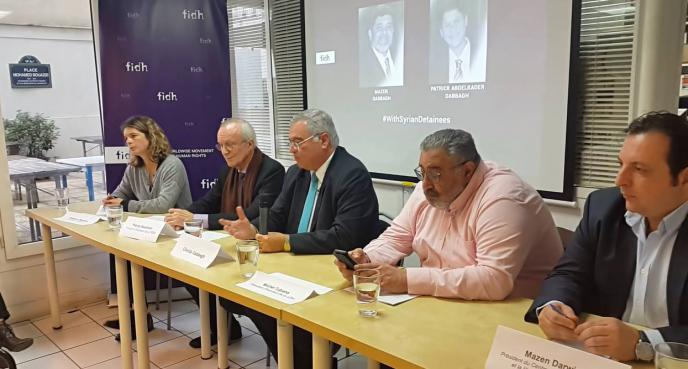 A press conference was held at the center for the International Federation for Human Rights in Paris on Tuesday announcing the first lawsuit against the Syrian regime over two missing Franco-Syrian nationals, Mazen Dabbagh and his son, Patrick Dabbagh, who have been detained for three years.

Mazen, 57, and his 22-year-old son Patrick were both detained in separate arrests in early November 2013.

Obeida Dabbagh, Mazen's brother, told Rozana Radio that he had sent the legal documents to the French court in the capital Paris.

The case has been assigned to representatives of the International Federation for Human Rights and the Worldwide Human Rights Movement, with the attendance of the head of the Syrian Center for Media and Freedom of Expression, Mazen Darwish.

The technicalities of the case have been kept secret and will not be disclosed until the French judiciary announces whether it accepts or rejects the suit.

The brother of the disappeared hesitated before filing the suit, telling Rozana that he had communicated over the last three years with parties in the Syrian regime government, and that he had communicated with the Ministry of Reconciliation in the regime government. After welcoming Obeida in the first meeting, regime representatives informed him not to return or ask any questions.

Asked about the one filing the suit and the name of the agency being accused, if there was a specific security branch or if it was against the regime president, those present declined to give details, while Obeida said that it was his case and the French government would assist him.

The brother of the arrested said he had been subjected to financial blackmail by an officer in the regime forces, who had asked him for $60,000 to deliver Mazen Dabbagh and his son to the border. Air Force Intelligence never disclosed the location of the detained family members.

Regarding the case, the head of the Syrian Center for Media and Freedom of Expression, Mazen Darwish said, “It’s not possible for us to expect results soon, but this is a message to all those who are carrying out violations inside Syria that these violations cannot pass peacefully and that there will be accountability even if it is after some time — there will be accountability in its moral and legal sense.”

He added: “Gambling on the silence of the people and that the Russian veto will not allow the case to head to the international criminal court is a failed gamble.”

Obeida concluded, saying: “We have been asking every concerned authority about the fate of the disappeared for three years, and we have not reached a result. We fear that one of our family could be at risk as a result of the suit.”