Kanaan was covering events in the town of Zafarana in the northern Homs countryside when he was hit by the air raid. 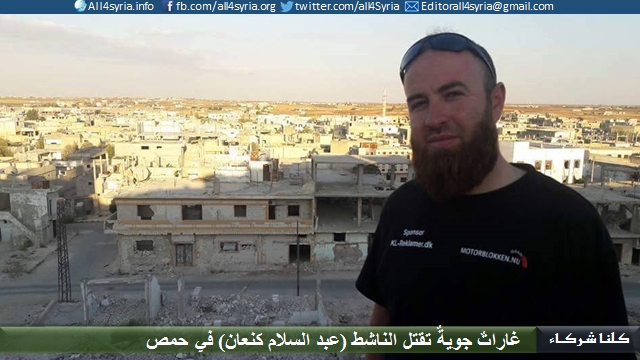 The Al-Jisr satellite channel on Monday mourned the media activist and cameraman Abdel Salam Kanaan, who was killed during an air raid targeting the area where he was in the northern Homs countryside.

The channel said in a statement that Kanaan was covering events in the town of Zafarana in the northern Homs countryside when he was hit by the air raid.

The raid killed a number of civilians and wounded others, while the channel’s correspondent Anas Abou Adnan survived the air raid.

The channel broadcast a video clip showing the first moments after the air strike which was carried out by warplanes on the town, showing heavy damage to civilian homes there.

Kanaan, who was known to his friends as Abou Ali, was from the Deir Baalba district in the east of the city Homs. He headed to the northern Homs countryside when the regime took control of the district and expelled most of its residents.